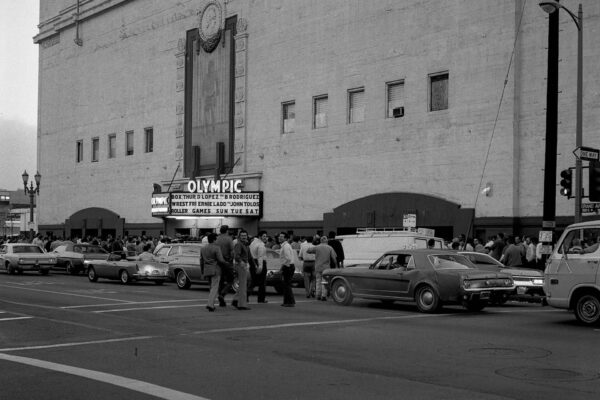 LA Plaza de Cultura y Artes presents 18th & Grand: The Olympic Auditorium, an exhibition recounting the 80-year history (1925-2005) of the Olympic Auditorium, the home for visceral entertainment in Los Angeles and a historic venue that shaped Los Angeles’ past and influenced its future. From the dangerous combat of boxing to the dramatic theatricality of wrestling, roller derby, and music, the gritty punch palace at the corner of 18th Street and Grand Avenue distilled the beauty and brutality of a divided city.

The Olympic Auditorium was a focal point for Mexican and Mexican American culture in Los Angeles. Its ring was a platform for contenders from Southern California and south of the border that prompted fierce rivalries and inspired intense bonds between athletes and fans. A part of the social fabric of L.A., the Olympic influenced popular culture through its weekly presence on local television, with its famous phone number “Richmond 9-5171,” and frequent appearances in Hollywood films and TV shows. The action and atmosphere at the Olympic attracted movie stars, gangsters, artists, writers, and community organizers. Still, its most loyal fans were working-class Angelenos, a fact well understood by Olympic manager Aileen Eaton, a female promoter who thrived in the male-dominated world of combat sports for nearly four decades.