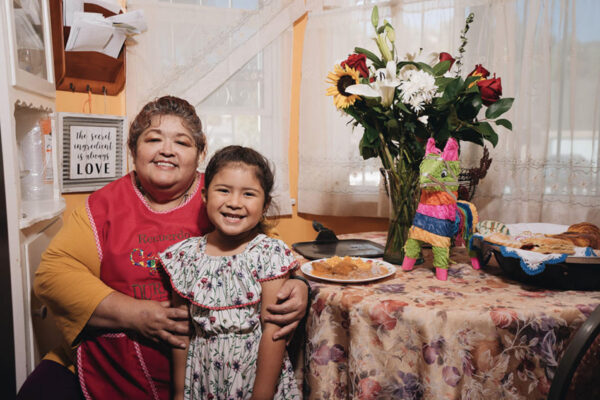 The exhibition reveals each abuela’s relationship to Mexican cuisine, their birthplaces in Mexico, and the city of Los Angeles, where the grandmothers live. For that, the 17 students of Portnoy´s USC Annenberg class, “Recording the Voices of Latinx Women & Food in Los Angeles: A Multimedia Oral History Project,” have created a website and audio stories and videos which will be available for viewing online on Telemundo’s streaming platform and on smart devices via QR codes. The audio and video tell the stories of these women, two of whom were born in the U.S., while the rest immigrated from places such as Mexico City, Puebla, Yucatán, Jalisco and Guerrero, bringing with them their knowledge of traditional dishes.

“Visitors can hear short audio stories from recorded interviews while viewing the spectacular photographs of the grandmothers and their families,” says Portnoy. “This multimedia experience brings to life their voices in a unique and exciting way.”

Rachel Aguilar, Yolanda Baza, Elsa Chan, Ana Guzman, María Elena Lorenzo-Linares, Margarita Nevarez, Consuelo Perez, Norma Luz Rodríguez, and Merced Sanchez are the abuelas that share their personal journeys as well as their knowledge about traditional dishes. These grandmothers have cooked, preserved, and passed on Mexican food culture to their children and grandchildren, while creating communities and cultures that are unique to Southern California.

Abuelita’s Kitchen: Mexican Food Stories features 22 photographs and one large map and 10 objects, including molcajetes, a comal, a tortilla press and more, one from each abuela in the exhibition. The exhibition explores the dishes the grandmothers make in their home kitchens, including chiles en nogada, mole, tamales, pozole, mixiotes, enchiladas, and more. Their migration stories are detailed in a colorful map of Mexico and L.A., while a final section of the exhibition presents their identities as traditional cooks, mothers, and grandmothers through photographs with their family members. Jessica Magaña-Sandoval is the exhibition’s photographer. A 28-minute documentary directed by Ebony Bailey, also called Abuelita’s Kitchen: Mexican Food Stories, will screen continuously at LA Cocina during the exhibition.

“Abuelita’s Kitchen: Mexican Food Stories fills a void of recorded experiences of Mexican and Mexican-American women, who have too often been absent from the walls of museum collections,” says Ximena Martin, LA Plaza’s director of programming and culinary arts. “Devoted to telling the Mesoamerican story of the cuisine’s origin, LA Cocina’s exhibitions and upcoming cooking classes trace how a world-renowned cuisine has evolved into a contemporary culinary phenomenon.”

Sarah Portnoy’s research at USC focuses on the culture of food in Los Angeles and Latinx culinary culture in general. She researches the topics of food and identity, food and immigration, food and community/family celebrations, and food and political/social issues, particularly as they relate to the Latinx population of Los Angeles.

The Voces de las Abuelas project was made possible with support from California Humanities, a non-profit partner of the National Endowment for the Humanities. Visit www.calhum.org.