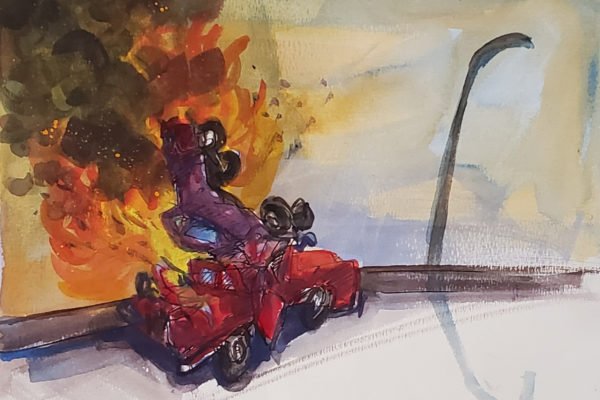 The exhibition was curated by Dr. Susana Smith Bautista. It includes early black and white grid-like compositions in graphite on paper and abstract color grids in pastel from the 1960s and the beginning of figurative works in the 1970s. Also included are a selection of the artist’s personal sketchbooks from 1969 and his later trips to China. Some of the works displayed that have not been exhibited for decades, including the recently restored mural on paper La Conquista (1972), two untitled spray can murals from 1971 inspired by the collective murals of Los Four, and a large foreboding painting End of an Era (1986). Also included in the exhibition are black and white photographs by Elsa Flores Almaraz from 1975 to 1982, showing a glimpse into the Chicano art scene of that time.

Explore an interactive virtual tour of our exhibition. Walk through our galleries from anywhere on your favorite device and view the artworks and stories of the renowned Chicano artist. Enjoy the 360-degree views of the exhibition from all angles for a true interactive and immersive experience. Click here to learn how to navigate the tour.

Register for Exhibition: Carlos Almaraz: Evolution of Form | Through February 13, 2022

Your ticket for: Carlos Almaraz: Evolution of Form | Through February 13, 2022