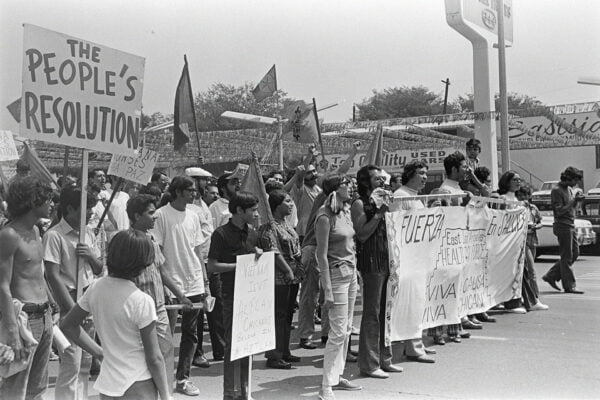 Marking fifty-one years since the National Chicano Moratorium took place in East Los Angeles, where more than 30,000 participants marched to protest the Vietnam War, LA Plaza de Cultura y Artes presents Patriotism in Conflict: Fighting for Country and Comunidad. This exhibition recounts the momentum and critical events that led to one of the most influential demonstrations in Chicana/o history and inspired a generation of sociopolitical activism. Curated by Esperanza Sanchez, Patriotism in Conflict investigates the multiple roles and generational perspectives that expanded definitions of patriotism, the diverse ways it was expressed, and the key activists and alliances that mobilized the National Chicano Moratorium Committee (NCMC) to end the war and rally for justice on behalf of their communities and country.

History of the Chicano Moratorium

The Chicano Moratorium rally held on August 29, 1970, was the culmination of multiple Moratorium demonstrations organized that gained national notoriety. The Vietnam War became a breaking point for many families deciding between supporting or opposing U.S. involvement, while their children’s lives hanged in the balance. Many young Chicanos were drafted or volunteered into fighting on the front lines, which resulted in a dramatically disproportionate number of Latino deaths.

The collective contributions of activists, student groups, local neighbors, community and religious leaders throughout the Southwest led to a heightened opposition to the war. They showcased their patriotism by organizing community strength that led to chaotic riots, police brutality, and multiple fatalities, most notably Los Angeles Times journalist, Rubén Salazar. In many ways, the Chicano Moratorium represents a coming of age of the growing Chicano political movement. Their determined efforts during the moratoriums and the Chicana/o Movement continue to inspire succeeding generations to continue the struggle for social justice and equal rights for all.

Patriotism in Conflict: Fighting for Country and Comunidad includes thematic sections. Each one of them examine different topics: Latina/o contributions from World War II, the Korean War, to the Vietnam War, the rising Chicana/o Movement. It also examine the legacies inspired by the Moratoriums, and the 50th anniversary memorial march of 2020. The exhibition displays more than three-hundred materials that include: historic and contemporary photographs, silkscreen prints, hand-made posters, flyers, textiles, multi-media artworks, and video and film installations; selected memorabilia, such as medals, buttons, flags, personal letters and certificates; and special reference publications from newspapers, magazines albums, and journals.

Explore an interactive virtual tour of our exhibition. Walk through our galleries from anywhere on your favorite device and view the artworks and stories of the historic era. Enjoy the 360-degree views of the exhibition from all angles for a true interactive and immersive experience. Click here to learn how to navigate the tour.

Visit the exhibition through your cellphone! 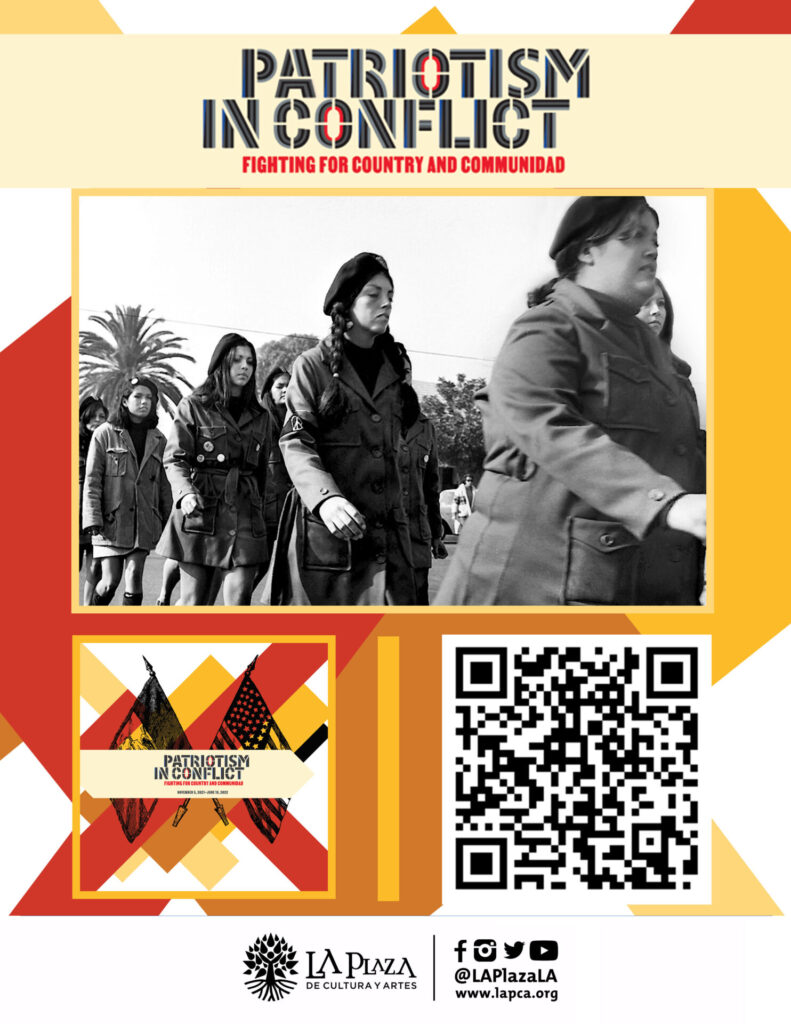 Our Curatorial Team continues to make our exhibitions accessible for those who are not able to visit our campus on Main Street. This cellphone tour helps guide visitors through the space, whether in the museum or outside. It’s the latest work in our continuing program to make all exhibits available on a virtual basis. Just scan your smartphone camera over the QR Code and you’re there!

Register for Exhibition: Patriotism in Conflict: Fighting for Country and Comunidad | November 14, 2021 through June 19, 2022

Your ticket for: Patriotism in Conflict: Fighting for Country and Comunidad | November 14, 2021 through June 19, 2022