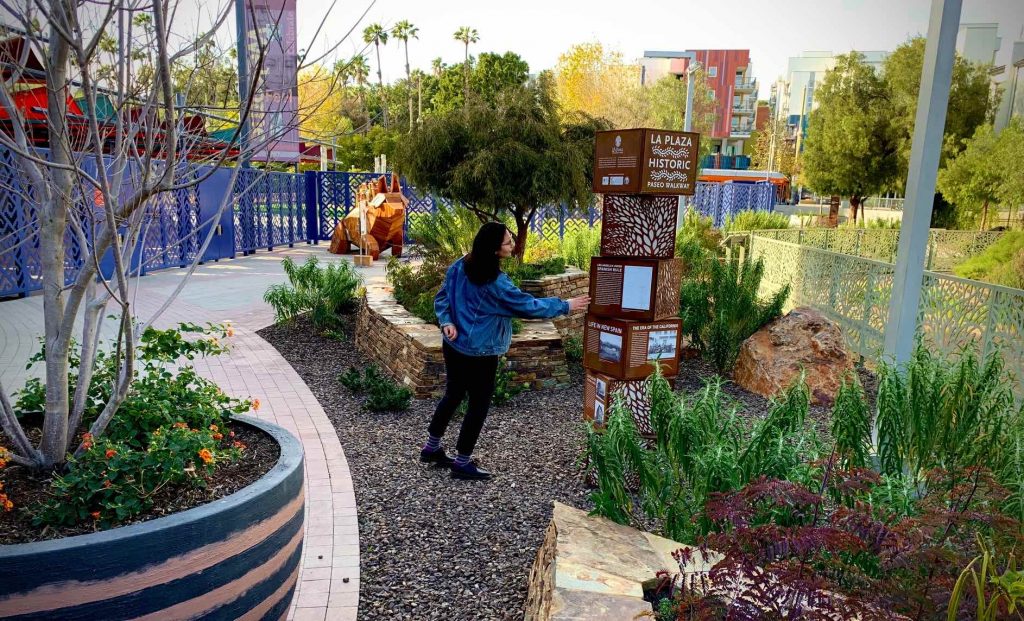 The landscaped, block-long pathway between the LA Plaza museum and the historic La Placita Church, extending from Main Street to Spring Street, now includes historical signage about the city’s rich past, from the indigenous Gabrielino-Tongva settlers through the years of rule by Spain, Mexico and the United States. Construction of this phase of the Paseo Walkway was funded by the Los Angeles County Parks and Open Space District (Prop A), LA Plaza, and Trammell Crow.

The Walkway is designed to help Angelenos and visitors learn about Los Angeles history. From a new iconic landscaped archway on Main Street — standing as a welcoming point attracting visitors to the Walkway and Museum — through a series of historical signs and monuments, the Walkway provides visitors with snapshot histories of the city as they learn about the many historical structures in the area.

The Paseo Walkway also serves as a new recreational space in the congested downtown historic core, with lush native landscaping and trees and soon-to-be-installed tables and chairs, where visitors can relax, enjoy a meal and take in the historic sites around them. “The renovated LA Plaza Paseo Walkway adds an important new chapter to the historical narrative of the El Pueblo Historic Monument district,” said John Echeveste, LA Plaza CEO. “Located in the historic heart of the city, the Paseo Walkway will link together the many historic elements of El Pueblo. LA Plaza is pleased to play a key role in the restoration of El Pueblo through the Village and Walkway projects.”

The project is designed by SWA Design Group of Los Angeles, with Brightview as general contractor, and Cowley Real Estate Partners as project manager.