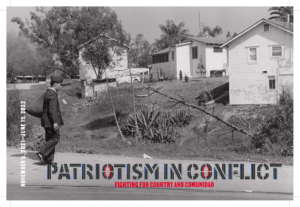 LA Plaza de Cultura y Artes presents Patriotism in Conflict: Fighting for Country and Comunidad, a retrospective exhibition marking fifty-one years since the National Chicano Moratorium in East Los Angeles, where more than 30,000 participants marched to protest the Vietnam War. This exhibition recounts the momentum and critical events that led to one of the most influential demonstrations in Chicana/o history and inspired a generation of sociopolitical activism, while recognizing the contributions made by Latinos who served in the military, before, during and after the Vietnam War.

Curated by Esperanza Sanchez, Patriotism in Conflict: Fighting for Country and Comunidad is centered on the march and rally held on August 29, 1970 to bring national awareness to the disproportionate death rate of Chicanos and Mexican Americans in the Vietnam War, and how that flash point has links to current times. The exhibition is an opportunity for a new generation of Latinx youth to understand the struggles, roles, and actions of individuals and organizations who lived out their ideals and to learn about the different ways to demonstrate their both patriotism and their opposition to political oppression.

“Patriotism in Conflict explores the larger definition of what being a patriot represents during uncertain times. The show’s concept focuses on the events leading up to and the legacy of the Chicano Moratorium, which continues to inspire many, including younger generations, to participate in community activism. This exhibition reflects how multi-generations dealt with their own beliefs, ideas, and philosophies of serving their country and community during the Vietnam War era,” says Esperanza Sanchez, curator of the exhibition.

John Echeveste, LA Plaza CEO, reminds us that, “The 1970´s were one of the most tumultuous times of recent history, splitting communities apart. This exhibition examines the struggles faced by East Los Angeles as thousands of its sons marched off the war, never to return, while others took to the streets to protest what they say as an unjust and inhumane war.”

Patriotism in Conflict: Fighting for Country and Comunidad made its way to LA Plaza de Cultura y Artes first floor gallery after being on hold for fifteen months due to the museum’s pandemic-related closing. The delay, however, allowed for the expansion of the exhibition’s scope and includes more visual representations and artwork, including images of 50th anniversary of the Chicano Moratorium, August 29, 2020, the same day the exhibition would have been inaugurated. That day, Chicana/os and Latinx joined with other people of color and allies in protest of similar injustices to those happening in the 70s, such as systemic racism, inequality, and police brutality.

In that regard, Karen Crew Hendon, Senior Curator at LA Plaza, states that “The social-political activism today demonstrated through recent protests and community organizing to fight against injustice and xenophobia has direct roots to the Civil Rights movement, which set an important precedence, legacy, and recognition of the powerful role community plays to empower people towards creating progressive change and cultural representation. This exhibition brings multiple perspectives, experiences, and collections together to examine how far we’ve come and the inspiring work that is continuously evolving for our future generations”.

Art and objects on view include Movimiento-era photographs by George Rodriguez, Oscar R. Castillo, and Jose Galvez, and from the La Raza Photo Collection of Luis Garza; buttons, flyers, and publications; video clips by Myléne Moreon, Tom Myrdahl, and Randall Wilson; artwork by Malaquías Montoya, Vibiana Aparicio-Chamberlin, Patrick Martinez and Vincent Valdez; and photographs of the 50th Anniversary of the Chicano Moratorium by Luis Sifuentes and Monica Salazar. The exhibition also includes an interactive area where visitors simulate their participation in the Selective Service Draft Lottery by choosing between two options: “Register for the War” or “I Object!”

A mural designed by the 3B Collective will also be on display in LA Plaza’s Main Street windows. 3B is a collective of artists and designers that along with producing individual works, create site-specific installations, public artworks, and murals. All of the collective members come from immigrant and indigenous families and are committed to providing a platform for inclusive works which encourage pride and recognition of the different facets in our communities. Members include Adrian Alfaro, Alfredo Diaz, Aaron Estrada, Michael Khosravifarb, Oscar Magallanes, and Gustavo Martinez. 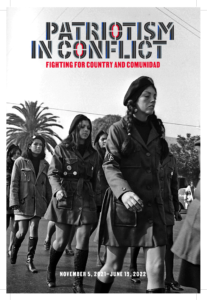 Celebrate the opening of Patriotism in Conflict: Fighting for Country and Comunidad with music and light refreshments. To RSVP, email rsvp@lapca.org

Ruben Salazar: Man in the Middle examines the life and mysterious death of pioneering journalist Ruben Salazar. At the heart of the story is Salazar’s transformation from a mainstream, middle-of-the-road reporter to a supporter and primary chronicler of the radical Chicano movement of the late 1960s. Guest Speaker: Phillip Rodriguez, director.

On Two Fronts: Latinos & Vietnam examines the Latino experience during a war that placed its heaviest burden on working class youth. Framing the documentary are memoirs of two siblings, Everett and Delia Alvarez, who stood on opposite sides of the Vietnam War, one as a POW and the other protesting at home. Guest speaker: Mylène Moreno, director.

The Chicano Moratorium was not only an awakening of Latino political power. It also served as inspiration for artists, musicians and others to express their activism via paintings, poems and songs. Panelists: Moratorium veteranos Jesus Velo, Oscar Castillo, Carlos Montes, David Botello and additional guests.

Latina and Brown Beret women championed women’s rights, took the lead in mobilizing the community, and their constant outreach were foundational to the success of El Movimiento. They provided radical change to health care, education, political opportunities, and more. Panelists will include key Chicana leaders and scholars who will share their experiences and mentorship for women today.

ABOUT LA PLAZA: LA Plaza de Cultura y Artes celebrates the past and inspires the future by sharing the untold stories about the history, cultures, values, and traditions of Mexicans, Mexican American, and all Latinos in the founding and continuing evolution of Southern California through compelling and culturally enriching exhibitions, educational programs, and public programs.

Your ticket for: History and Legacy of the 1970 National Chicano Moratorium on Exhibit at LA Plaza