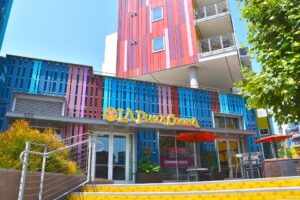 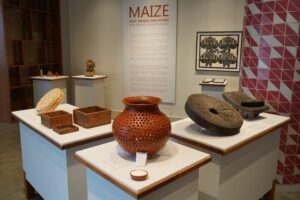 LA Plaza Cocina, the first museum dedicated to Mexican food, opened its doors on Monday, February 7, with its inaugural exhibition Maize: Past, Present and Future, a tribute to the cuisine’s most essential ingredient. Curated by Maite Gomez-Rejón and Ximena Martin, visitors will recognize many of the tools and processes used by their ancestors being displayed in the facility’s gallery. Through photographs, tools, artifacts, and cookbooks, LA Cocina recounts the story of this sacred grain and its essential role as a global food source. The exhibit inaugurates this space, which will host an exhibition every six months.

Located in Downtown Los Angeles, LA Cocina is a unique space that expands the role of LA Plaza de Cultura y Artes in sharing stories about Mexican, Mexican-American, and Latina/Latino history, art and culture. LA Cocina is a museum, the first one of its kind focused on Mexican cuisine; a teaching kitchen dedicated to exploring the rich culinary traditions and treasures of Mexican and Mexican American cooking; and a store where Angelenos and visitors will find rare and high value culinary-related ingredients, cookbooks, decorative items, and utensils used in preparing the complex cuisine.

Maize: Past, Present and Future displays instruments used for the preparation of maize like a metate, one of the oldest tools in the Americas and used for grinding nixtamal into masa; a pichancha, a clay colander used during the nixtamalization process to strain the corn kernels from the nejayote (water mixed with lime); a desgranador; bound and shortened dried corncobs against which fresh ears of corn are scraped to remove their kernels; and cuartillos, wooden boxes used to measure corn kernels, beans, nuts or other grain. Visitors can also see archaeological pieces and instruments from Mixtec and Zapotec cultures, as well as from the state of Colima, in west Mexico.

“Maize is the foundation of Mesoamerican societies and arguably Mexico’s greatest gift to the world,” said food historian Maite Gomez-Rejón. “In precolonial Mexico rituals involving maize marked the beginning of life. It is appropriate that LA Cocina’s inaugural exhibition would celebrate this sacred grain.”

We invite you top experience LA Cocina and LA Tiendita. We are currently planning a year-round series of onsite culinary programs to include cooking classes and demonstrations; rental spaces; and various series of experiences.