LA Plaza Cocina presents an exhibition on chocolate, the food of the gods 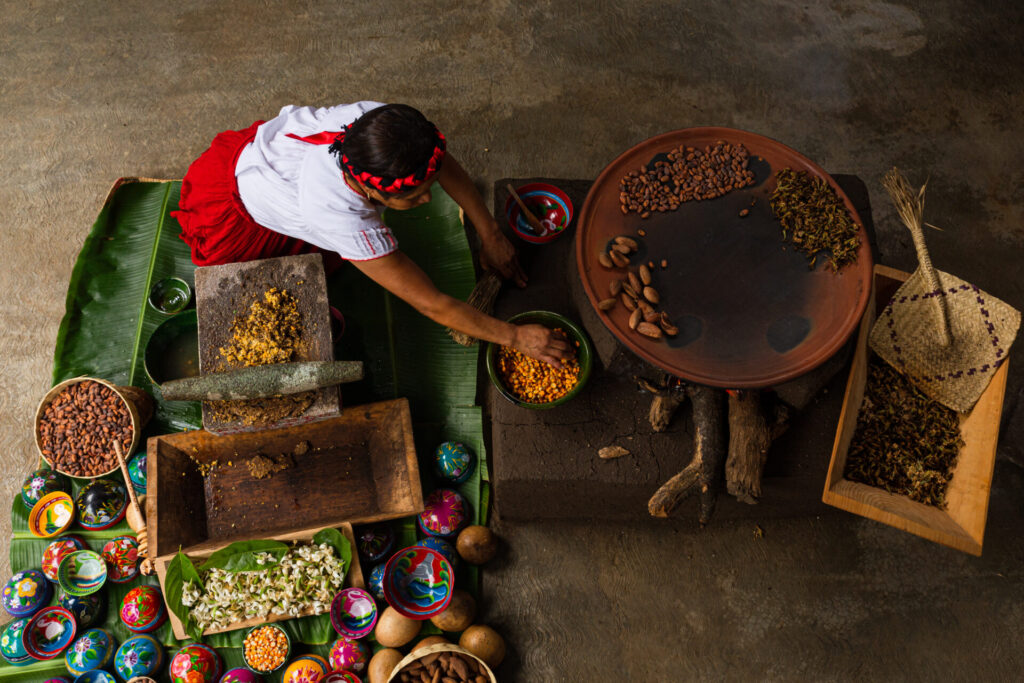 LA Plaza Cocina opens its newest exhibition, The Legacy of Cacao, which focuses on chocolate, one of the most popular foods in the world, on Saturday, November 5, 2022. The exhibition follows the evolution of chocolate from its first reference by the Olmec civilization, more than 2,000 years ago, to the present day. A reception taking place on Saturday, December 3, 2022 from noon to 4pm.  The exhibition will be on display until April 30, 2023.

Visitors of LA Cocina, the first museum dedicated to Mexican food in the United States, will learn about one of Mesoamerica’s most sacred natural staples, a food prized around the world for its taste and seductive effects. The exhibition will include precolonial objects and photographs by noted food and beverage photographer Shava Cueva.

The exhibition, which reveals how the sacred connotations of the original pre-Hispanic beverage remain alive in contemporary Mexico, is co-curated by LA Plaza Director of Programming and Culinary Arts, Ximena Martin, and Maite Gomez-Rejón, an educator, writer, and cook who has been exploring the nexus of art and cuisine for more than a decade.

“When eating a candy bar or drinking hot chocolate, one doesn’t think about how deeply rooted chocolate is to Mesoamerican history,” says Gomez-Rejón. “The chocolate we eat, or drink today has evolved over the centuries and tells a fascinating story. The Legacy of Cacao will give people a better understanding of how complex the beloved staple is.”

Throughout the exhibition’s run, LA Plaza Cocina will feature a culinary programming related to the exhibition, including a Platica y Prueba demonstration on the History of Chocolate taking place on December 15, as well as offering chocolate and related merchandise at LA Tiendita museum gift shop.

“Chocolate can be complex and simple, but it’s the hands and inherited recipes that make this indigenous ingredient delicious through a variety of drinks, sauces, y más,” says Ximena Martin, Director of Programming and Culinary Arts for LA Plaza de Cultura y Artes.

Since its opening, LA Plaza Cocina has become a unique cultural hub in downtown via its exhibition space, cooking classes, demonstrations, and tastings by local chefs and traditional cocineras, as well as its boutique store. In Spring 2023, LA Plaza Cocina will launch its Culinary Youth Training Program, through which it will train young people in basic cooking skills and catering operations in a 10-week program.

LA Plaza Cocina is an extension of LA Plaza de Cultura y Artes, a museum and cultural center dedicated to make known the role of Mexicans, Mexican Americans, and all Latinos in shaping the past, present, and future of Los Angeles.

Platica y Prueba: The History of Chocolate
Thursday, December 15, 2022
7pm | $30
Celebrate the holidays by exploring the history of chocolate, tracing its origins from the ingredient being a food for the ancient gods, to the modern chocolate bar. Once seen as a nobility for the Aztec and Mayans, and later European aristocrats, you’ll learn how chocolate has been able to transform for all to consume and enjoy. In this class, attendees will get the chance to enjoy a tasting of chocolate de agua and try tejate, a non-alcoholic flower beverage made of ground corn, ground cacao, mamey seeds and rosita de cacao). Guest Speaker: Chef and Historian, Maite Gomez-Rejón, founder of ArtBites and a guest tejate maker. Register at https://www.eventbrite.com/e/platica-y-prueba-the-history-of-chocolate-tickets-417632047697

Your ticket for: LA Plaza Cocina presents an exhibition on chocolate, the food of the gods

LA Plaza Cocina presents an exhibition on chocolate, the food of the gods