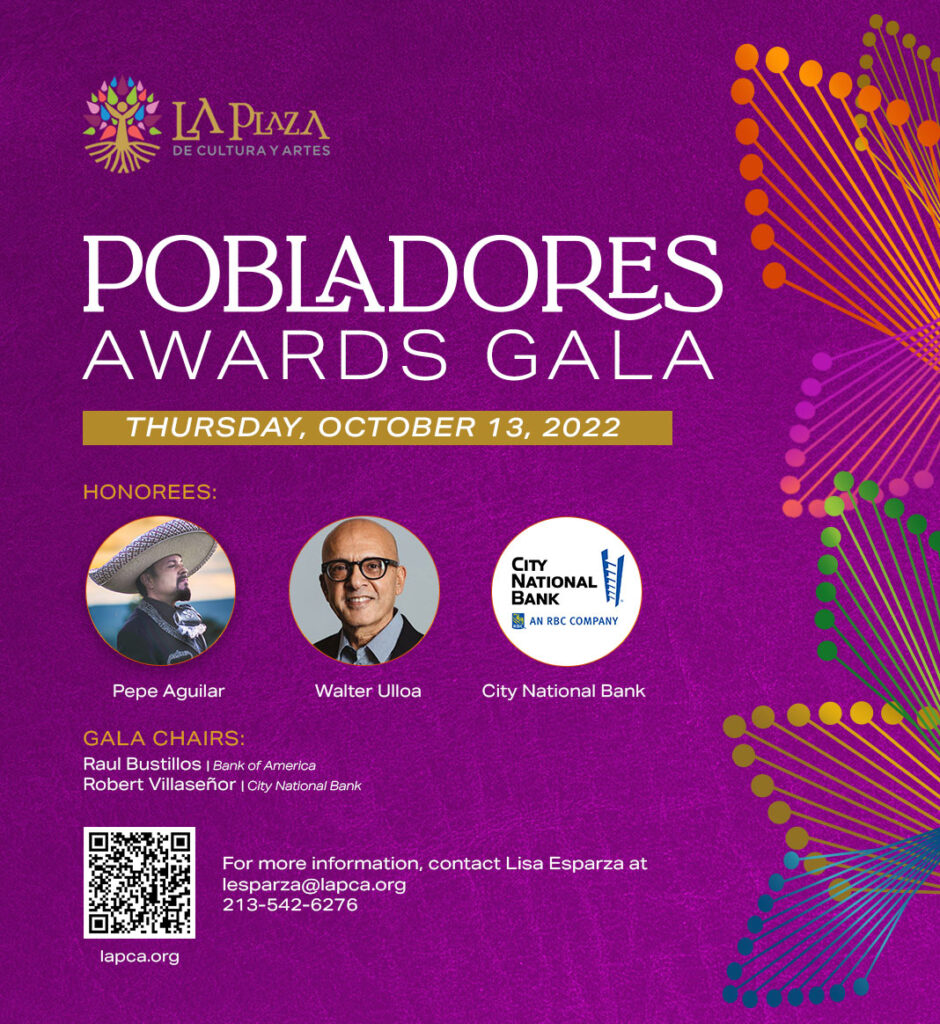 The Pobladores Award recognizes individuals, organizations, and companies who, much like the original pobladores settlers from Mexico, have blazed a trail that continues to endure, inspire, and enrich. The Awards Gala serves as LA Plaza’s primary fundraising event and supports the museum and cultural center’s many educational, exhibition, and programming initiatives. This must-attend event, which caps Latino Heritage Month in Los Angeles, welcomes more than 400 cultural, business, and government leaders.

“LA Plaza de Cultura y Artes is pleased to bring recognition to those that represent the best of our community through areas that have a great impact on our daily lives: communication, financial services, art, and music,” says Leticia Rhi Buckley, LA Plaza CEO. “Walter F. Ulloa, City National Bank, and Pepe Aguilar represent in the best way possible those important pillars.”

Pepe Aguilar is a singer, composer, and independent producer of Mexican music with global sales of more than 15 million records. He was born to the Mexican icons Antonio Aguilar and Flor Silvestre during a tour in Texas and sang for the first time at the age of three during a concert at Madison Square Garden. He is known for being a visionary. Three decades ago, he became an independent artist, which allowed him to win ownership of his own catalogue, create his own radio station, and get creative freedom. As a result, he has won four Grammy Awards, five Latin Grammy Awards, and nineteen Lo Nuestro awards, as well as several Latin Billboards. In 2012, he received a star on the Hollywood Walk of Fame. He is married to Aneliz Álvarez Alcalá and has four children: Emiliano Aguilar, Aneliz Aguilar, Leonardo Aguilar, and Ángela Aguilar. Leonardo and Ángela are also singers.

“Pepe Aguilar is one of the most recognized artists in the music industry due to his undeniable influence in expanding the reach of ranchera music, particularly in the United States. LA Plaza couldn’t be prouder to pay him this well-deserved tribute,” says Andy Carrasco, Chairman of LA Plaza’s Board of Trustees.

Since its founding in 2011, LA Plaza de Cultura y Artes is the only museum and cultural center in Los Angeles dedicated to preserving and sharing the history and many contributions of Mexicans, Mexican Americans, and all Latinos in Southern California, serving more than 500,000 people, including 80,000 school-aged children.

“It is critical to support the arts and LA Plaza’s Pobladores Awards is one way we can work together to keep this museum and cultural center thriving as the hub for the Latino community in the L.A. area,” says Gala Co-chair Robert Villaseñor.

“Guests and donors who make this event possible will enjoy an unforgettable and exciting evening full of celebration, pride in our heritage, and authenticity. It’s one of the highlights of all the activities that take place at LA Plaza de Cultura y Artes!” adds Raul Bustillos, Gala Co-chair.

Sponsorship information and individual tickets are available at: https://lapca.networkforgood.com/events/45412-pobladores-awards-gala