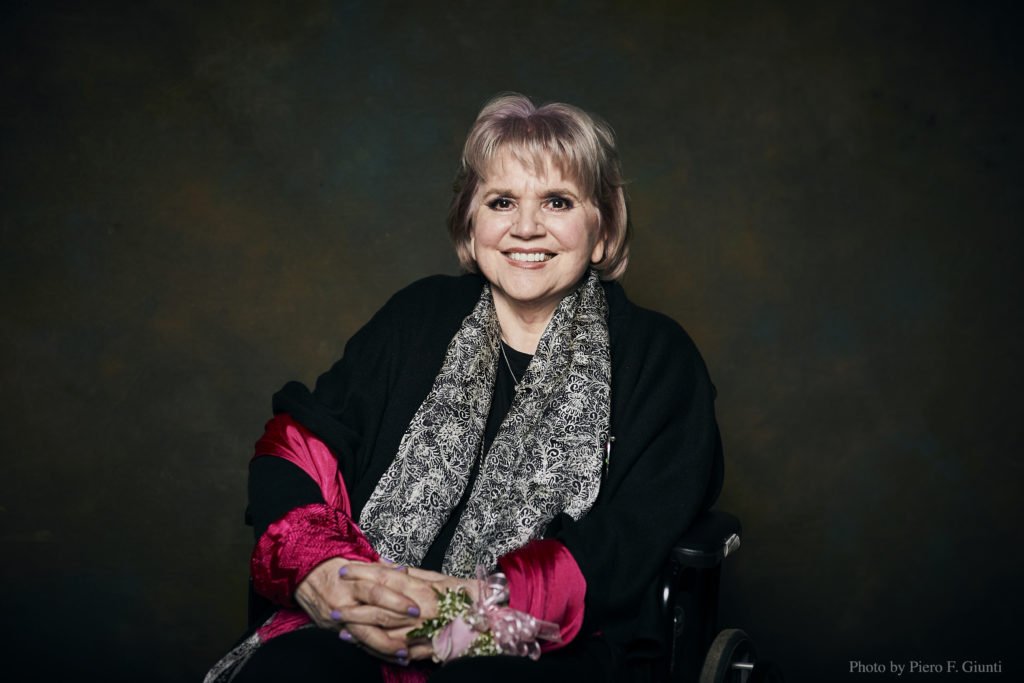 “Someone once asked me why people sing. I answered that they sing for many of the same reasons the birds sing. They sing for a mate, to claim their territory, or simply to give voice to the delight of being alive in the midst of a beautiful day.” – Linda Ronstadt, from Simple Dream: A Musical Memoir

Linda Ronstadt is arguably the most versatile and recognized singer of the modern era. She has forged a four-decade career which established her as one of the very important artists in one of the most creative periods in the history of modern music. She is the most accomplished Latina musical artist of her generation.

Linda Ronstadt was born on July 15, 1946, in Tucson, Arizona, and grew up surrounded by music. One of her early influences was the Mexican songs her father taught her and her siblings. She learned to play guitar and performed with her brother and sister as a trio.

Moving to Los Angeles in the 1960s, she began performing, first with the Stone Poneys and later as a solo act, recording a series of albums that helped create the country rock genre. Her rise culminated with 1974’s Heart Like a Wheel, which made her as star.

Throughout the 70s and into the mid 80s, she expended her musical inspirations, delving into rock, contemporary pop, new wave, pop standards, and country.

In 1987, Ronstadt recorded Canciones de mi Padre, a set of traditional Mexican songs from her childhood. To the surprise of many, the album became a multi-platinum success, and is still the largest-selling Spanish language CD in the history of the U.S. music industry. After another pop hit, Linda returned to traditional Mexican material with Mas Canciones and later recorded the Cuban-influenced Frenesí.

Later in the 90s, she returned to contemporary pop and country, as well as recording a children’s lullaby album, a foray into jazz, and in her final recording, a duet collaboration with Cajun artist Ann Savoy. She sang her last concert in 2009, and shortly thereafter announced her retirement from singing.

In 2011, she received a Latin Grammy for Lifetime Achievement and 2013, she was elected to the Rock and Roll Hall of Fame. In 2014, Linda was honored by President Barack Obama with National Medal of Arts at a White House.

Her 2013 book, Simple Dreams, A Musical Memoir, made the New York Times best-seller list. She also toured with her highly-acclaimed one-woman show, “A Conversation with Linda Ronstadt.” In 2019, she returned to the pop charts with the best-selling live CD, “Live in Hollywood,” recorded as an HBO special in 1985.

Committed to marriage equality and an advocate for undocumented immigrants, she serves on the Advisory Board of Los Cenzontles Cultural Arts Academy in San Pablo, California, dedicated to the preservation of Mexican Heritage

A documentary, Linda Ronstadt: The Sound of My Voice, premiered at the 2019 Tribeca Film Festival and will air on CNN later this year. 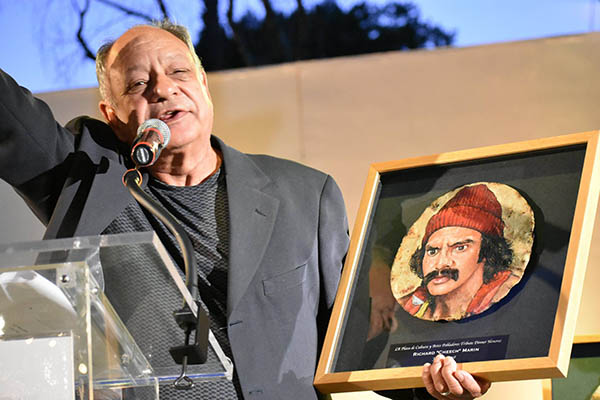 Marin was born in Los Angeles, California, to Mexican American parents, Oscar Marin, a policeman in the LAPD, and his wife Elsa (Meza), a secretary. His nickname “Cheech” is short for chicharron.

Marin graduated from Bishop Alemany High school and then studied at San Fernando Valley State College (now California State University, Northridge) dropping out before graduating. He move to Canada, where he met his partner, Tommy Chong, an formed the comedy act Cheech and Chong during the 1970s.

With Chong and on his own, Marin has participated in a number of comedy albums (Cheech and Chong, The Big Bambu, My Name is Cheech, the School Bus Driver), feature films (Up In Smoke, Born in East L.A., Once Upon a Time in Mexico), television series (The Golden Palace, Nash Bridges, Judging Amy) and as a voice over actor (The Lion King, Cars, Coco).

An avid collector of Chicano art since the 1980s, he has developed what is considered the finest private collection in the United States, many which formed the core of his blockbuster exhibition Chicano Visions: American Painters on the Verge, which broke attendance records during its groundbreaking 12-city tour during 2001-2007 to major art museums across the United States.

He has published four art books and a recent biography titled “Cheech is Not My Real Name … But Don’t Call Me Chong.” Cheech recently headlined a group of recipients of the Latin Spirit Awards, given by the California Latino Legislative Caucus. He’s also promoting both his Tres Papalotes mezcal brand and Cheech’s Private Stash line of clothing and cannabis products. Cheech continues to share his art collection through shows and lectures throughout the U.S. and planning for opening of the Cheech Marin Center for Chicano Art, Culture & Industry in Riverside in 2020.