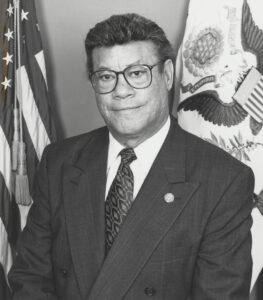 Esteban Edward Torres served as the founding chair of the LA Plaza de Cultura y Artes Board of Trustees from 2002 to 2015 after a distinguished career of public service.  A Korean War era veteran and a longtime antipoverty activist in East Los Angeles, with strong ties to the labor movement, Torres served eight terms in the U.S. House of Representatives (1982-1999) representing a district that included large sections of East Los Angeles, the San Gabriel Valley and Southeast LA County.

Torres was born in a mining camp in Miami, Arizona, on January 27, 1930. When Torres was five years old, his father was deported to Mexico, during the mass deportation of that era, and he never saw him again. Esteban, along with his mother, Rena Gómez, and his younger brother, Hugo, moved to East Los Angeles in 1936, where he attended public schools and graduated from James A. Garfield High School in 1949. Raised  by his mother and grandmother, Teresa Baron-Gómez, Torres was instilled with a sense of cultural pride. “My mother and my grandmother were very strong women, very educated and very proud to be Mexicans. They were the ones that taught me to defend my rights, and to not be ashamed to be a Mexican.”

From 1949 to 1953, Torres served in the U.S. Army, during the Korean War, and was honorably discharged with the rank of sergeant first class. Torres used his benefits from the GI Bill to study at the Los Angeles Art Center in 1953. Over the next decade, he took courses at East Los Angeles College and California State University at Los Angeles. He also took graduate-level courses, at the University of Maryland in economics and at American University in Washington, D.C., in international relations. Torres married Arcy Sanchez of Los Angeles on January 22, 1955. The couple raised five children: Carmen, Rena, Camille, Selina, and Steve.

Torres was introduced to politics by way of his activism in Local 230 of the United Auto Workers (UAW) Union. In 1958 his coworkers elected him chief steward of Local 230. He was later appointed the UAW organizer for the western region of the United States and in 1963, was tapped as a UAW International Representative in Washington, D.C.  From 1964 to 1968 he served as the UAW’s Director of the Inter-American Bureau for Caribbean and Latin American Affairs. In 1968, Torres returned to Los Angeles, founding The East Los Angeles Community Union (TELACU), a community action organization that grew under his stewardship into one of the nation’s largest antipoverty agencies.

In 1977, President Jimmy Carter named Torres to the ambassadorial rank of Permanent Representative to the United Nations Educational, Scientific and Cultural Organization (UNESCO). Torres also served as a Special Assistant to the President from 1979 through 1981.  In 2019, UCLA awarded Torres the coveted Bruin Award, the university’s highest non-athletic award.

This room is dedicated by the LA Plaza de Cultura y Artes Board of Trustees in honor of its founding chair, Esteban E. Torres, who served his country and his community notably and nobly as an activist, artist, organizer, statesman, public servant, solider, husband, and father.

Your ticket for: The Honorable Esteban E. Torres Board Room