The Restoration of Our Buildings

The Restoration of our Buildings

The buildings’ shell and core improvements were designed by Harley Ellis Devereaux and historical architect, G. Taylor Louden, AIA. The Los Angeles-based firms of Chu+Gooding Architects and Rios Clementi Hale Studios were engaged to design and restore the buildings and grounds to create a venue for LA Plaza’s multidisciplinary, state-of-the-art cultural center. The rehabilitation was completed in December 2009 and after tenant improvements, LA Plaza relocated its administrative offices to the fifth floor of the Vickrey-Brunswig Building in October 2010 and opened to the public in April 2011. 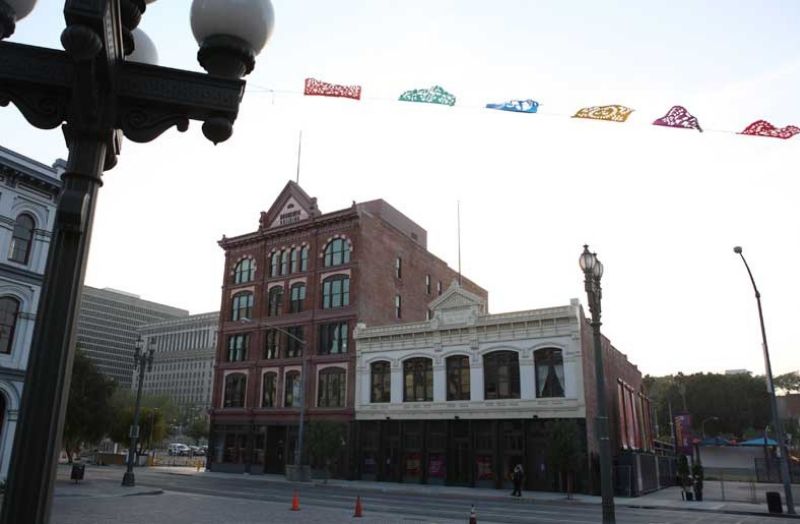 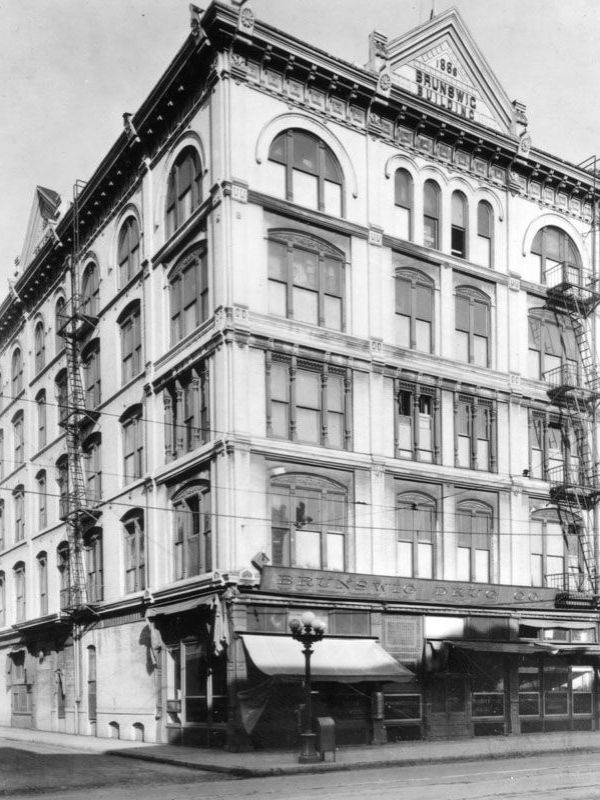 The Vickrey-Brunswig Building was built on land once owned by the family of Juan Jose Dominguez, a retired Spanish soldier who came to California with the Portola expedition and later with Father Junipero Serra.

Businessman William Vickrey employed architect Robert B. Young to design and build the five-story structure to house the Eastside Bank, then called the “Vickrey Building, 1888.” Completed in 1888, it is one of the oldest five-story buildings in Los Angeles and the city’s first “skyscraper.”

The F. W. Braun Drug Company purchased the building in 1897 and made significant alterations to retrofit the building for use in the wholesale pharmaceutical trade. Further alterations occurred when Lucien Napoleon Brunswig, one of Braun’s partners, purchased a controlling share of the Braun Company in 1907 and renamed it the Brunswig Building.

In the 1930s, the County of Los Angeles acquired the building, housing various County offices, including both a courthouse and a crime lab. The building was vacated after the 1971 Sylmar earthquake and the exterior cornices removed for public safety. In the 1990s, several fires caused significant interior damage to the building.

After a complete exterior and interior restoration that restored the building to its original glory, the structure is now registered as a federally-designated historic building.

Built in 1883 by Frenchman Philippe Garnier, who arrived in Los Angeles in his teens and became a prosperous rancher, businessman and land developer, the Plaza House is also part of the Garnier Block of buildings near El Pueblo.The Plaza House sits on a residential property previously known as the Baric Adobe.

The Plaza House was designed by Octavius Morgan, who together with partner Ezra F. Kysor formed one of the first professional architectural firms in Los Angeles.

They chose this prime location to complement other designs by Kysor, including the Pico House and the Merced Theater, which are still standing and all share a Victorian Italianate style to complement much of the other construction during the period, also located at El Pueblo.Over the years, the upper floor of Plaza House served as private residences, while the ground floor hosted a variety of stores, markets, saloons, and restaurants, including the well-known La Esperanza bakery and restaurant that operated from the 1940s to 1960s. After years of decay, a fire in 2002 destroyed much of the original roof, skylight, and other elements.

The Plaza House was restored as part of the establishment of LA Plaza. The skylight, one of the city’s first, was replaced with a more contemporary version, and the structure of the boarding rooms was left intact and reimagined as a replica of Main Street Los Angeles in the 1920s. 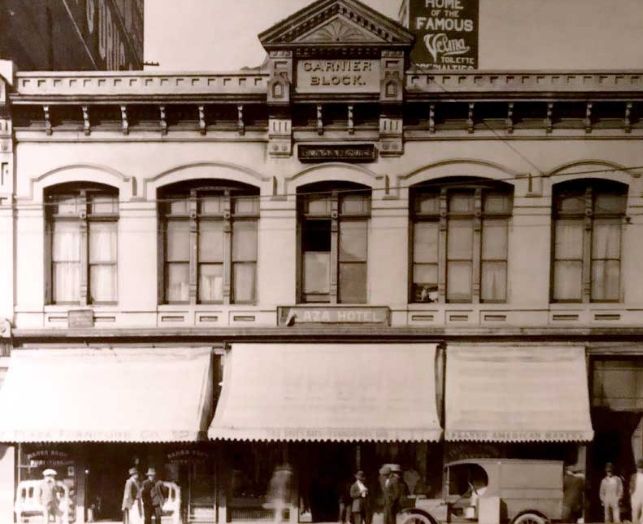 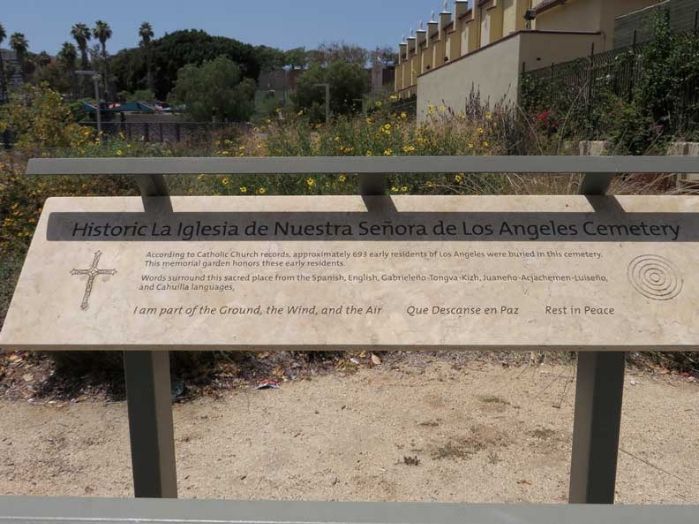 LA Plaza is also the site of Camposanto, the city’s first cemetery, established in 1848 as part of the city’s first church, La Iglesia de Nuestra Señora la Reina de los Ángeles (The Church of Our Lady Queen of the Angels) also known as La Placita. Cited records taken from California's historic mission registers show that roughly 670 people were buried in the graveyard.

Two buildings were constructed over the site and were demolished several decades ago.Excavations to create LA Plaza’s walkway uncovered remains of the Camposanto at the patch of land next to La Placita. Construction was temporarily delayed while LA Plaza met with Los Pobladores, a group of family members of those buried at the site; Native American groups; archaeologists; and officials of the Los Angeles Archdiocese, to develop a respectful course of action.

A memorial garden, designed after consulting with the aforementioned groups, is enclosed by a permanent fence and includes appropriate signage. Today, the Camposanto is a federally designated site closed but visible to the public. It memorializes some of the city’s first residents with monuments that explain its history

This monument commemorates the State of California’s apology for its actions during the Mexican Repatriation of the 1930s. During that period, as many as one million people—about 60% whom were United States citizens—were deported to Mexico 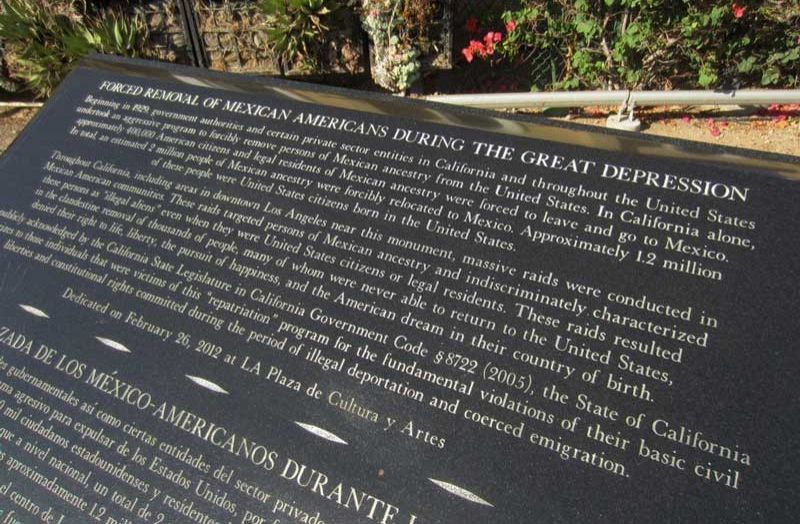 Your ticket for: The Restoration of Our Buildings

The Restoration of Our Buildings